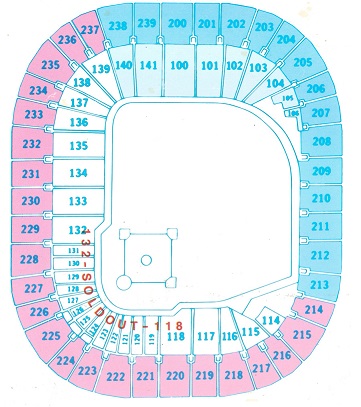 • All Twins Graphic Tee museum images are from eBay or admin’s personal collection, or maybe etsy or something.
• Three photos of dome in the late 90’s including two of the three gallery headers courtesy of Zack Hample
• Mockup template used for shirts featured on home screen – Designed by Freepik

• Title header image of the ticket office via

They’re selling a Montreal Expos cap with a 1994 World Series patch on it. There was no 1994 World Series, which is the joke, but what’s hilarious is that even if there were a World Series and the Expos played in it, they wouldn’t have worn a cap like that because they didn’t start sewing patches on caps until 1996. And who cares? Something that’s fictional in the first place can’t be inaccurate, right? The Tampa Bay Rays didn’t have throwback uniforms so they invented some to look extra 70’s. It still evokes a feeling. Let’s do that, but with the Metrodome. What if Bob Dylan and Prince and Juan Berenguer played a concert there after the 1987 World Series Championship Parade? Looking at a shirt from that fictional event makes you feel just as much nostalgia as you would seeing a vintage Monsters of Rock tour shirt or a mint AL West champs hat.

Why the Metrodome? You wouldn’t be here if you didn’t already know the answer to the question. The dome was hated for the way it was, and beloved for what happened there. New stadiums are nice, but their flaw is assuming that everyone is very impressed with granite counter-tops. Maybe the experiences we want aren’t made of luxury and exclusivity but of heart and soul and community – in other words, the Metrodome.

We can make it real – heart and soul and youth – in the Metrodome of our dreams.